I’ve recently returned from FOSS4G 2016 in Bonn, Germany. It was my first OSgeo conference, and it was quite amazing.

As a little background the OSgeo foundation supports the development of open source ‘geo software’, from desktop packages like QGIS to behind-the-scenes libraries (Proj.4) and even geospatial metadata catalogues (eg Geonetwork). My involvement? Over the years I’ve used parts of the OSgeo stack heavily. Increasingly. This also holds for the National Computational Infrastructure, so it made sense to submit an abstract and try to go.

My talk was going to be about storing and querying point cloud data from HDF files. Unfortunately I didn’t finish my experiments in time, and I ended up presenting a high level view of NCI, our point data storage and analysis needs, and some attempts at using Postgres-pointcloud and SPDlib (a HDF based point and waveform data storage system). This worked well with the session – until that time, most of the point data discussions at FOSS4G revolved around airborne or mobile LiDAR. It was nice to feel a bit like we had some unique problems to solve, and I feel grateful to be able to stand among the giants of OSgeo. In the same session, for example, were the developers of the PDAL and Entwine libraries – technical wizardry right there! I just try to keep up, and apply this stuff to jobs I need to do.

The main takeaway from the conference, however, is not the fact that I gave a talk. It was the amount of insight gained from the conference itself, and just being there. It was incredibly difficult to choose which sessions and workshops to attend, there were so many that were potentially useful for my life. I left feeling like I’d stepped into a seriously strong community of people who care about making great tools, and giving them away.

I chaired a session on web processing services, which was a new experience and really informative – especially Nis Hempelmann presenting on birdhouse services. This has seen immediate application in my work at NCI, so in the spirit of FOSS4G I’m running birdhouse, bugging the developers and have made my first ever commit on the project (a documentation typo – but you get the picture. Get involved).

Some other highlights were:

Ivan Sanchez’s lightning talk presenting what3fucks to the world. This actually has a serious point about how to divide the world into smaller pieces, and also how open software and data can be immediately applied, whereas closed-source options are not necessarily going to live as lively a life. If you build something and share it, it gets used.

Pretty much all of the keynote talks. Tomas Zerweck from Munich RE spoke about FOSS in risk management (which is all of us, science nerdlings, we are the boss of risk managers – without our field observation data, there is nothing). Oddly, every title slide showed Australia, and given our ignoble position as top consumers and chief backwards-pedalers of the world, I wondered if we are seen as a risk to be managed. Probably! Another standout keynote was Peter Kusterer, from IBM Germany, who described how the FOSS community got behind an emergency response to refugees arriving in Germany. Take note also Australia: Wir shaffen das!

In the regular programme – so much to choose from! I went to a discussion on open standards and open software, and was heartened to hear that small developers and big organisations with standards voting rights are happy working partners. I saw an excellent talk by Arnulf Christi on the relative permanence of data compared to software. Mind the data – words to live by, because there’s no point collecting all this information if nobody can use it in 3, 10, 50 years time. My brain was completely exploded by Olivier Courtin, on using postGIS in a real advanced way. Indeed. And I saw as many geoserver-related talks as I could, because it’s my job. But really, there was so much to choose from, and I will gradually catch all the videos of talks I would have liked to see. A colleague of mine just showed me another mind-blowing talk on geotiff.js and plotly that I would never have thought to go to. Here’s the programme:

…and you can download or watch all of the talks from the conference here:

So conference main work things done, here is a photo from the conference dinner – on a boat on the Rhine, with an accordion and cello. Later, after some beers and discussions of life and point clouds, I was dragged onto the dance floor and busted out my finest moves. 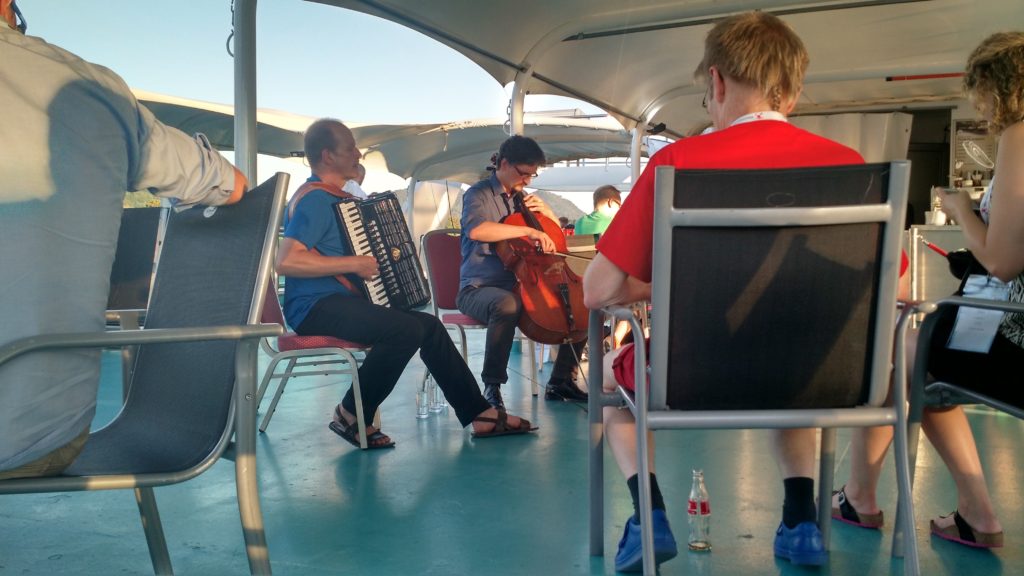 …and here a couple of photos from the world conference centre, an amazing venue. 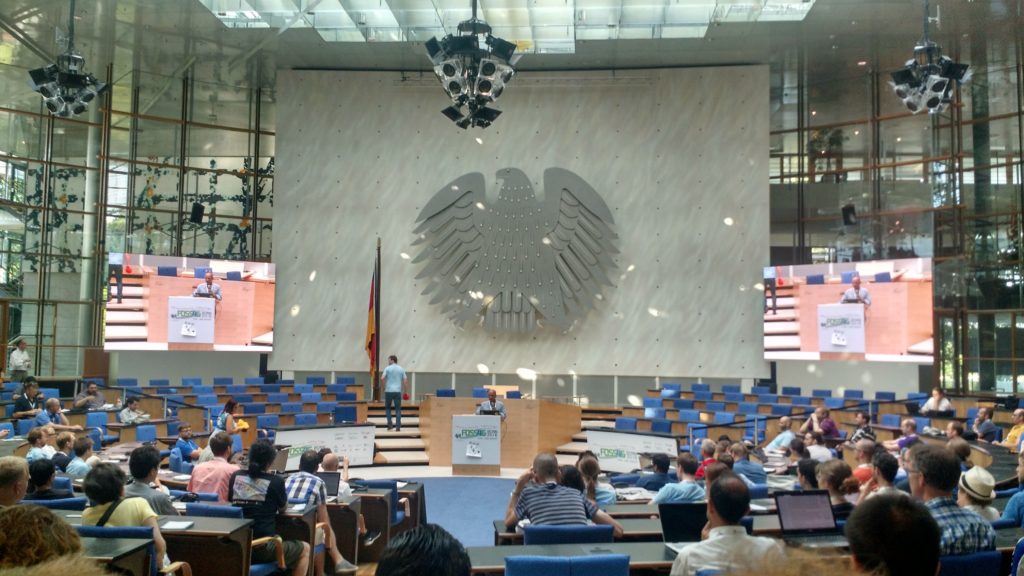 The theme of the conference was ‘building bridges’ – and it certainly met those aims. There was a vast cross section of the spatial data community from insurance companies doing their due diligence about whether to switch to FOSS software stacks, to excited developers presenting brand new ideas. I was able to meet and speak to a number of people I’d only ever heard and read about – making that personal connection which always helps when we need to develop ideas into reality later.

I’m really grateful that I was able to go, and I’m already looking ahead to 2017, and what ideas I can convert into reality so that I’ve got something to bring to the community.

Finally, a side effect of the conference was catching up with an old friend I have not seen in 14 years!  We have surprisingly parallel lives – so what did we do? climbed rocks, of course!